Robert “Bob” Lee Carsten age 81, of Missouri Valley, passed away on Tuesday, Dec. 24, 2019, surrounded by family after a short illness. Bob was born May 24, 1938, in Holt County, Page, Neb., to Chester and Mary Irene (Williams) Carsten. He graduated from Bonesteel High School in Bonesteel, S.D. and promptly left to serve in the United States Army, where he was stationed in Germany. After serving in the U.S. Army, he moved to Omaha, Neb., and worked for Sidles Company where he met Peggie Lou Kuhney. They were married on July 22, 1960, in Omaha. In 1972, he joined the Metropolitan Utilities District as Operator 1, Gas Production. He also worked as a Stationary Engineer in both Gas Production and the Platte South Plant. He was promoted to Senior Gas Plant Maintenance Mechanic, Gas Production in 1983, Operating Foreman in 1992 and training foreman in 1998. He retired from M.U.D. in 1999 with 26 years of service.

Bob had many passions, including motorcycle trips with family and friends, taking care of his acreage in Missouri Valley and riding his bike. He rode in Ragbrai twice, the great trek across Iowa. He was dedicated to his family and the farming community.

Bob was preceded in death by his parents, his wife Peggie Carsten, sister Alyce (Carsten) Mills and sister in law Laura Carsten.

Bob is survived by his brother, Gerald “Jerry” (Peggy) Carsten of Whiting, his children, Julie (Douglas) Andersen of Missouri Valley, Chester (Dorothy) Carsten of Pueblo West, Colo., and Valerie (Jay) Delong of Modale, as well as 8 grandchildren and 9 great-grandchildren.

Bob and Peggie’s ashes are being placed together at 10 a.m., Monday, May 24, 2021 at Westlawn-Hillcrest Cemetery in Omaha, Nebraska.

“Burst Your Bubble!” at the Fourth Annual Art at the Park

Mondamin’s Philip Davis is preparing to take the reins 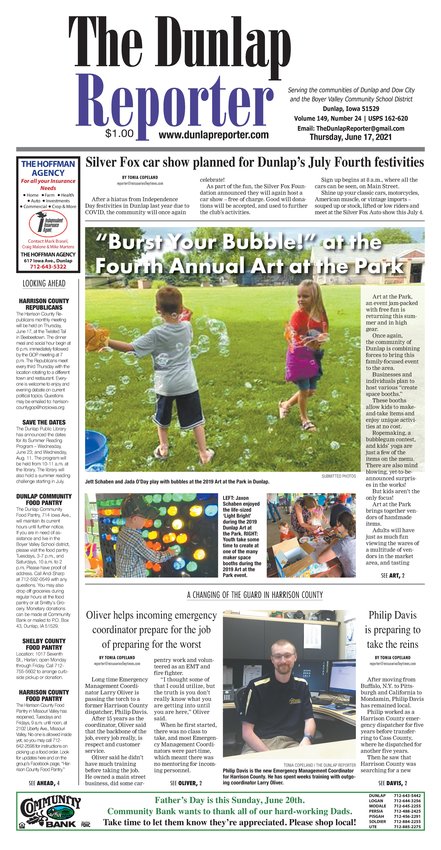